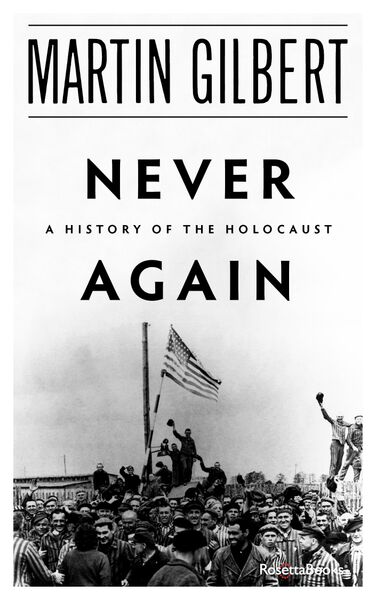 A history of the Holocaust in 78 two – page spreads, each spread has a specific theme, and is illustrated with photographs, colour maps, art work, recollections, and commemorative postage stamps. Themes include pre-war Jewish life, Kristallnacht, Education and Culture in the ghettos, the Warsaw Ghetto revolt, Escape to the partisans, Hidden Children, Jews in the Allied armies, Anne Frank, Oskar Schindler, Raoul Wallenberg, the Death Marches, the Liberation of the concentration camps, Second Generation, and reflections on ‘Never Again”.

“ 'On 23 October 1943 a group of 1,750 Polish Jews who had been held at Belsen, ostensibly to be exhanged for German citizens held by the Allies, were deported to Birkenau.  Driven towards the undressing section of the gas chamber by SS Sergeant-Major Josef Schillinger, they were ordered to undress.  As they did so, the SS guards seized rings from their fingers and watches from their wrists:  a final act of looting.  When Schillinger ordered one of the women to undress completely, she threw her shoe in his face, seized his revolver and shot him in the stomach.  She also wounded SS Sergeant Emmerich.  According to some reports she was a dancer from Warsaw, named Horowitz.  After her act of defiance, other women began to strike the SS men, at the very entrance to the gas chamber, severely injuring two of them.  The SS men fled.  Shortly afterwards they returned, armed with grenades and machine guns, with the camp commandant, Rudolf Hoess.  One by one the women were removed from the gas chamber building, and shot.'

“Report of Jerzy Tabau, a non-Jewish Polish prisoner at Auschwitz who escaped shortly after this episode, and who included it in his report  "which reached the Allied governments in the summer of 1944, and was published in Washington and London.' ”

“Every historian of the Holocaust owes a debt of gratitude to the work of those who have assembled the basic documentation, without which no account, however short, can be compiled.  More than twenty-thousand Jewish communities – large and small – were destroyed in Europe between 1940 and 1945.  The task of listing their names and giving the number of Jews living in the communities before the war was undertaken after the war by Yad Vashem, the Holocaust memorial in Jerusalem, and published in 1965 as Blackbook of Localities Whose Jewish Population was Exterminated by the Nazis.”

“... Gilbert creates a comprehensive account of the Holocaust and addresses the questions that are being asked today about one of the darkest chapters in the history of western civilization.  He brings together the most recent developments in historical research and sets the subject in its correct historical context.”  Despatches