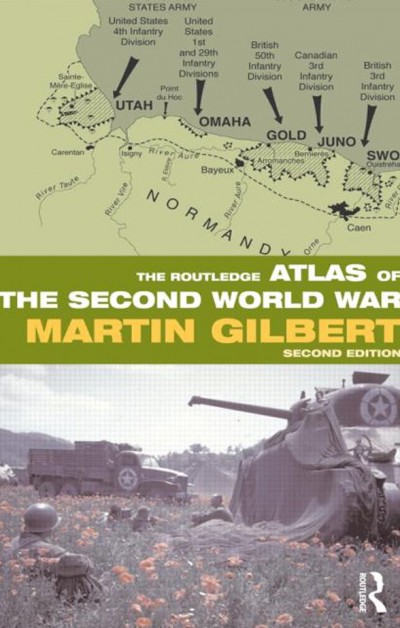 The war that began with Japan’s renewed attack on China in 1937, and came to Europe two years later with the German invasion of Poland in 1939, spread ruthlessly to many nations and to every continent. It led to the loss of far greater military and civilian life than any previous conflict, exceeding in intensity even the ravages of plague and famine of earlier centuries. The maps in this atlas reflect the war both in it strategic aspects, and in its inhuman – and human – face.

This graphic history of the Second World War, told through 257 specially-drawn maps covers all the war fronts, the war on land, at sea and in the air, the fate of prisoners of war and civilians, espionage and deception, resistance, flight and expulsion, persecution, refugees, and the human cost of the war. The itemized Index lists every place mentioned in the book

“To prevent the transfer of German troops to the East, to help defend Breslau from Soviet assault, the British Chief of the Air Staff spoke to his colleagues on 31 January 1945 about 'the assistance to the Russian advance which might be affected by the strategic bomber force' by 'heavy attacks in the four cities, Berlin, Dresden, Chemnitz and Leipzig'. On 4 February the Soviet Chief of Staff learned of the imminent transfer of a possible 31 German armoured divisions (150,000 troops) from Norway, Northern Italy, The Netherlands and central Germany through Dresden to Breslau, where only 40,000 German soldiers were available to try to halt the Soviet advance. The new German troops would enable that advance to be halted and even pushed back. An urgent Soviet appeal to the Allies to bomb Dresden, in order drastically to interrupt the movement of these German reinforcements, had been approved by the British Deputy Prime Minister, Clement Attlee, on 2 February, in Churchill's absence on his way to the Yalta Conference.”

“Every author is influenced by personal experiences and memories. Among the themes I have mapped is that of prisoners of war. As a ten-year-old schoolboy in Britain, I was greatly affected by the distressing experiences of my father’s cousin Simmy Gordon, who had been a prisoner of war of the Japanese. In the 1970s I was influenced by Victor West, who signed his book of poetry for me with the names of the prisoners-of-war camps in which he had been incarcerated in Germany between 1941 and 1945: he had been taken prisoner during the fighting in Greece, when the unit with which he was fighting ran out of ammunition.

“In my travels through Europe, I met and befriended men and women who had taken part in the partisan war, choosing the dangerous path of resistance to occupation. They, too influenced my work, as did the numerous wall plaques in so many European countries dedicated to those who had been shot down at street corners and in doorways for daring to challenge the occupying power.”

This really is a brilliantly useful book … an outstanding reference work that can also be enjoyed as an unusual graphic history of the Second World War and its many political, economic and military dimensions.” Military Illustrated

“Sir Martin Gilbert’s Atlas of the Second World War is a work of extraordinary scholarship…. No university, library, historian – or anyone interested in World War II – will want to be without it.” Henry Kissinger