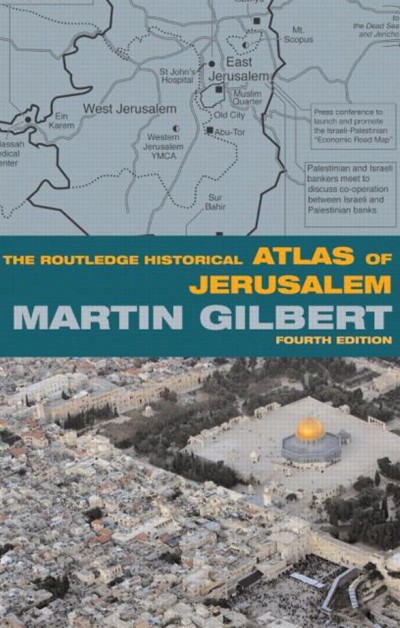 A graphic history of the city of Jerusalem presenting the development of a remarkable city, the focal point of Jewish, Christian and Muslim sentiment, and the capital of the State of Israel. Sixty-nine maps track the city’s story from ancient times to the Israeli and Palestinian neighbourhoods of the present day, through biblical beginnings, imperial rule, growth and idealism, British mandate Jerusalem, divided Jerusalem, conflict and hope. Facing each map page are photograph and print illustrations of the period.

“ 'The real work is, after all, not the drawing of the city plan on paper, not the description of it in a book, not the comments on it in an office file, or even the making a picture of it for the walls of the Royal Academy. The real work is to administer it intelligently and towards the shaping of a more or less ideal end. The only test of this is the beauty and comeliness of the city itself.' C.R. Ashbee, Civic Adviser, Jerusalem, 1920-1922.”

“In this Atlas, I trace the history of Jerusalem from biblical times to the present day. Each map is illustrated by a facing page of prints or photographs. The sixty-nine maps, taken together, are intended to provide a broad survey of Jerusalem’s history, with special emphasis on the city’s development during the last 150 years, when it grew from a remote, impoverished provincial town of the Ottoman Empire, with a population of fewer than 40,000, to a capital city with a population of more than three quarters of a million, of whom almost a third were Palestinian Arab Muslims.”

“To render the history of this city in an original and imaginative way is no easy task. Not only has Jerusalem been more written about than any other city in the world, but its history – which is the history of the Jewish people itself – is as rich and varied as the annals of civilisation. Yet Gilbert has done this masterfully, in a factual, compact and accessible form which at the same time abounds with insights. The maps span the history of Jerusalem from David's days to the present. Old engravings are juxtaposed with pictures of the city and her people, like drama set against reality, a reality which was more often than not bleak. Throughout, maps, engravings and photographs are linked together by Gilbert's comments, information and the memorable quotations he has collected. The atlas, the result of a long and careful research, is authoritative and an indispensable reference book.” Elon Salmon, Jewish Observer and Middle East Review

“...of real value and quality. It should be useful to those wonder if Jerusalem should be divided again … and those who think it must keep its unity.” R.D. Kernohan, Church of Scotland Life and Work