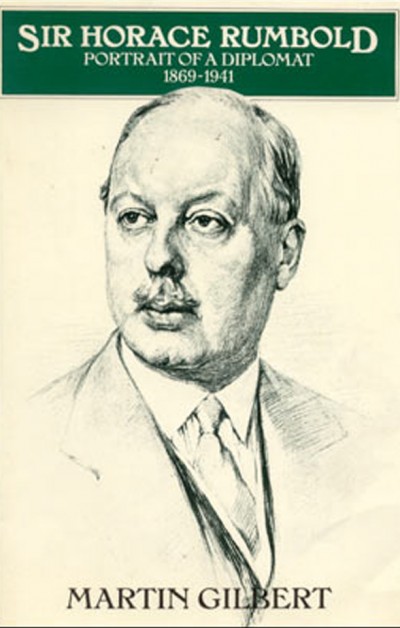 Horace Rumbold entered the diplomatic service in 1891 and remained in it for more than forty
years, until 1933. He served his apprenticeship during the last decade of Queen Victoria’s reign, in
Egypt, Spain and Austria-Hungary. On the eve of the First World War, in the absence of the British
Ambassador, he was Chargé d’Affaires in Berlin, and was in a position of responsibility during the
immediate crisis preceding the outbreak of war. During the War itself, while he was British
Minister to Switzerland, he was involved not only in diplomacy but also in espionage and intrigue,
and in the discussions for a negotiated peace with both Austria-Hungary and Turkey. He was
British Minister in Warsaw in August 1920, when the Bolshevik Army approached the city,
determined to crush the newly independent Polish state. He was senior Allied High Commissioner
in Constantinople during the Chanak crisis of 1922, and was Ambassador in Berlin when when
Hitler came to power in 1933.

During the six years after his retirement he watched in Europe the realization of his fears and forecasts. In 1936 he served on the Royal Commission of Inquiry in Palestine, which recommended two separate states, one Arab, one Jewish.

1921, Constantinople (now Istanbul), on refugees from the Bolshevik Revolution:

“Lady Rumbold was particularly concerned to help the Russian refugees, whose plight was a severe one. When the Rumbolds had reached Constantinople in November 1920, there were 120,000Russians crowded into sixty ships in the Sea of Marmora. Lady Rumbold helped to organize the British Emergency Committee, which undertook the feeding, bathing and clothing of 10,000 Russian women and children. Unknown to her husband, Lady Rumbold took pity on a young Russian officer, wounded in both legs, whom she hid in an Embassy bathroom for three weeks before a place could be found for him in hospital. From a hut in the Embassy garden, clothes were distributed to the Russians by the English ladies of the Emergency Committee. Early in 1921 Rumbold requisitioned the Sultan's derelict stables in which 1,500 refugees were able to find room to sleep. But the majority had nowhere so palatial to go.”

“Rumbold spent most of his life abroad. He had no patron among English politicians, and no friend
in the Foreign Office to give him the postings he wanted. He advanced his career by his own
efforts. Politically he was a Tory. But he acted abroad according to his day-to-day interpretation of
events. He had strong prejudices, but they did not distort his professional advice. He never sought
to curry favour with the Foreign Secretaries who were his masters. He spoke his mind without
deceit, and took the initiative without hesitation when he felt action was needed.”

"Martin Gilbert (who is the official biographer of Winston Churchill) has produced a substantial - indeed a massive - work of history of great value, scrupulously researched and beautifully organised. As an example of attention to detail, nothing could be more convenient than the insertion in the footnotes of a thumbnail biography of each of the large cast of characters as they appear. This is an historian's book, essentially for students of history, but it is also illuminating for the general reader." RUSI: Journal of the Royal United Services Institute for Defence Studies

"Has diplomacy changed? Does it ever change? This book does much to answer the question. It is an admirably clear, precise and unprejudiced account of a career which opened before the turn of the century and closed in 1933, when Hitler was already screaming and ranting in Berlin." Paul Grey, The Tablet