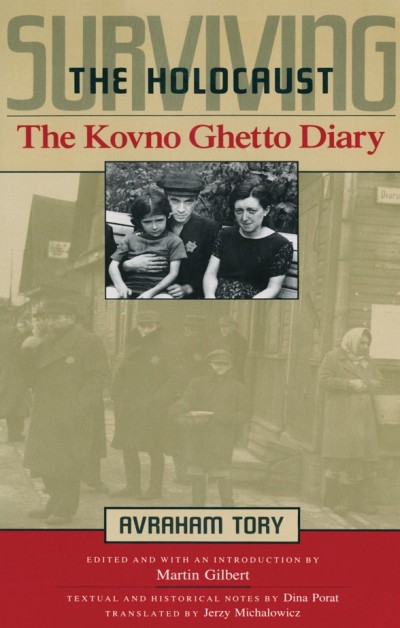 Avraham Tory’s chronicle of life and death in the Jewish Ghetto of Kovno, Lithuania, from June 1941 to January 1944, was written under conditions of extreme danger by the Secretary of the Jewish Council, and ghetto inmate. After the war, Avraham Tory was forced to entrust his diary to leaders of the Escape movement; eventually it made its way to his new home in Israel, and into this English translation with editing and notes by Martin Gilbert.

From the last testament by Dr Elhanen Elkes, the head of the Kovno Ghetto Jewish Council, to his children in England, dated 19 October 1943:

“The last massacre, when 10,000 victims were killed at one time, took place on October 28, 1941. Our total community had to go through the "selection" by our rulers: life or death. I am the man who, with my own eyes, saw those about to die. I was there early on the morning of October 29, in the camp that led to the slaughter at the Ninth Fort. With my own ears I heard the awe-inspiring and terrible symphony, the weeping and screaming of 10,000 people, old and young – a scream that tore at the heart of heaven. No ear had heard such cries through the ages and the generations. With many of our martyrs, I challenged my creator; and with them, from a heart torn in agony, I cried: 'Who is like you in the universe, my Lord!'In my effort to save people here and there, I was beaten by soldiers. Wounded and bleeding, I fainted, and was carried in the arms of friends to a place outside the camp. There, a small group of about thirty or forty survived – witnesses to the fire.”

“For Tory himself, the publication after forty-five years of what has survived of his diary, and of the documents he had hidden with it, is an act of piety and remembrance for those who have perished. For readers of the diary, its publication brings an additional dimension to our knowledge and understanding of a period in Jewish history which will remain a lament for the generations to come.”

“The diary is an historical document of major importance.” Istvan Deak, New York Review of Books

“Tory’s diary is an account of the struggle for survival of ordinary men and women who were suddenly thrust into an insane world where none of the ordinary rules applied. It is a tragic chronicle of heroic endeavour.” John Jacobs, Jewish Chronicle