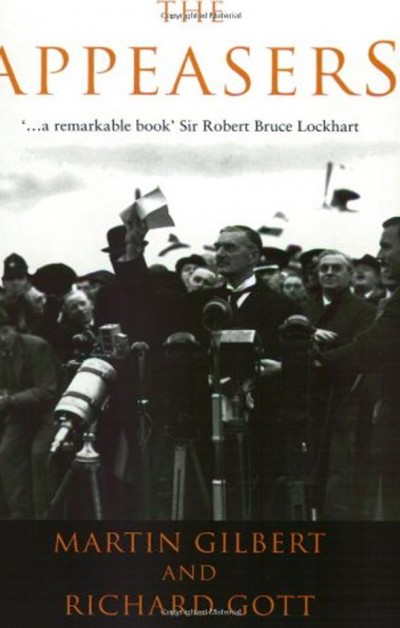 How did British Politicians react to Nazi Germany? Did their diplomats and advisors support
them? What was the real policy of Chamberlain’s Government? In this book Martin Gilbert and
Richard Gott reveal to what extent the British Government were willing to come to terms with
Hitler, regardless of the fate of the Czechs and Poles, and in defiance of their own Foreign Office
experts. The public were never told the full story – never knew to what extent the Appeasers went
against the national interest. The public wanted peace – but not peace bought at the price of
dishonour and humiliation. This book reveals the ruthless and unprincipled manner in which the
Appeasers planned and pursued their policy

The signing of the Munich Agreement, 29 September 1938:

“On arrival at Munich aerodrome at noon Chamberlain and Wilson were 'rushed off' to the
Führerhaus. The conference began at 12.30 pm. There was no arrangement for taking notes.
Chamberlain and Daladier were accompanied at the actual conference only by Wilson and Léger.
Hitler and Mussolini had their Foreign Ministers present. They discussed a memorandum
ostensibly put forward by Mussolini. It fact it had been drawn up by Weizsäcker, Neurath and
Göring, accepted by Hitler, and telephoned to Mussolini, the previous night. Chamberlain made a
weak attempt to get permission for the Czechs to be present. Hitler refused. Chamberlain said no
more. One of the most remarkable aspects of the conference, the absence of the Czechs, was thus
decided upon without argument. Newton was not alone in realizing that the Czechs would object to
the terms if anyone let them.”

“This is a history of British policy towards Nazi Germany, and of the men who supported and
opposed it. It shows in some detail how British policy was formed, how it was carried out, and why
it was misconceived, in the light of warnings received at the time from trained diplomats ….
British policy, far from appeasing Hitler, showed him that the British Government were willing to
come to terms with him at the expense of other nations. It is not our intention to examine the case
against appeasement, but to show what the appeasers sought, and what methods they were prepared
to use in order to attain their ends.”

'...in the excellent chapters dealing with exactly what passed between the British Embassy in Berlin and the German Government in the few days prior to the outbreak of war, their writing is compelling ... there are a lot of nicely turned phrases, and the photographs are brilliantly selected.' Roy Jenkins, Observer

'...by far the most comprehensive study of the subject yet. More over, the authors have digested the unappetising mass of official documents and private memoirs into a pungent narrative.' H.D. Ziman, Daily Telegraph

“Martin Gilbert … and Richard Gott … were both well under 25 when they decided to write The
Appeasers as a joint venture; and the cool arrogance of the first words of their foreword made me
warm to them at once.” R.H.S. Crossman, Guardian

“The authors are impartial between Left and Right in presenting their gallery of British appeasers.”
Sefton Delmer, Sunday Telegraph