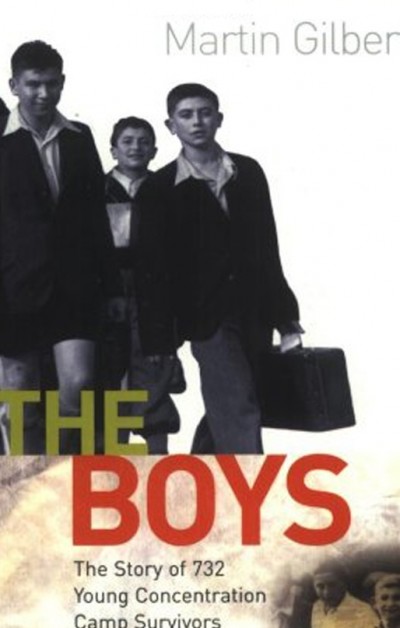 When Britain declared itself willing in the summer of 1945 to take in one thousand young survivors of the Holocaust, no more than 732 could be found.  During the following eight months they were flown from Prague and Munich to Windermere and Southhampton, as well as to Scotland and Northern Ireland.  “The Boys”, as they call themselves – there were girls among them too – became a tightly-knit group of friends whose shared wartime experiences were terrible beyond imagining, but whose companionship gave them a lifeline once they were in England.  This is their story.

“The immediate transition to life in Britain was difficult.  'I remember that some of our habits acquired in the camps were hard to break.'  Harry Spiro later recalled.  'We would sit at long tables to eat, and the bread would be given to the top of the table.  The first round of bread never reached the bottom of the table, because “the boys” would always take extra bread to hide for later.'

“ 'My main concern, after all the hunger I had suffered, was with food,' Zvi Dagan, originally from Piotrkow, wrote.  'I always worried as to whether there would be something to eat.  There was always enough food on the table, and what we didn't finish we took to put under our beds, just in case we weren't fed the next day.' ”

Dear Sir Martin.
I have read many of your books, and have just finished reading `The
Boys`. I just want to say that I consider this book probably the most important book you have ever written, and to `thank you` for writing it. It should be in every school library in the country.  Peter Gower-Adams

“All of the 732 'boys', as they call themselves – and this includes girls among them – had seen death at close quarters.  Many of them had seen their parents, or brothers and sisters, killed before their eyes, or taken away to a death camp at the time of the deportations from the ghettos.  Today, these 'boys' whom I shall refer to in this book without quotation marks, form a group of friends whose companionship is deeply rooted in appalling common memories.  A few of them were friends from their pre-war childhood.  Some had first met in the ghettos and slave labour camps.  Most became friends after their arrival in Britain.  Today they are banded together under the auspices of their own charitable organisation, the '45 Aid Society, named after the year in which the first of them came to Britain.  Other survivors who came to Britain later, were drawn to the society for the comradeship which it provided.”

“Thank you, Martin Gilbert.  Thank you for listening with your heart and soul to these 'Boys' who remained compassionate human beings in a dark world dominated by violence and cruelty.  Thank youf ro your talent in giving a gentle voice to their burning memories.”  Elie Wiesel

“This is a book about coming out of hell, about great evil, about the triumph of the human spirit.  One is left with hope, and admiration.  Almost unbearably painful reading, while being impossible to put down.”  Julia Neuberger, The Times

“Using the historical method that worked so brilliantly in his multi-volume life of Churchill, Marting Gilbert seldom intrudes, and lets the survivors speak for themselves.  To be sure, he is always there, assembling the thousands of scraps of memory into a coherent, compelling, moving narrative.  The result is undoubtedly part of the healing process.”  The New York Times Book Review

“This should be required reading.  Through the horror of these pages – a seminal contribution to the literature of the Holocaust and to the history of Nazi Germany – there shines the determination of the human spirit to soldier on and ultimately to triumph in the face of the most extreme adversity imaginable.”  Literary Review