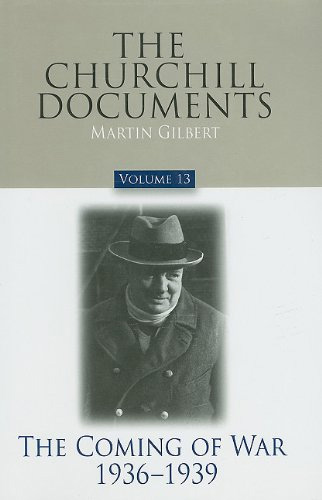 The letters and documents reproduced in this volume were written between January 1936 and the coming of war in September 1939, the period covered in the third part of Volume V of the official biography of Sir Winston Churchill. It continues the story of a man out of office and out of favour with the government, building up an incredible array of personal contacts, who enabled him to collect much secret information about the events of the day. The volume shows how and why many individuals, from both the government and opposition in Britain, turned to Churchill for help and guidance during the Austrian and Czech crises of 1938 and the Polish crisis of 1939.

“Within a few minutes of Chamberlain's broadcast telling the nation that we were at war with Germany, the air raid sirens sounded over London.

“Churchill went outside and stood staring into the sky. What thoughts must have been crowding into his mind at that moment! It was with difficulty that we prevailed upon him to enter an air-raid shelter. He only agreed to go when it was pointed out that it was up to him to set an example.”

"Because this volume of documents contains nearly four times the number of pages of the equivalent span of Main Volume Five, and because of new material which has emerged in the six years since the publication of Main Volume Five, it has been possible to include much previously unpublished and unknown material. Each of Churchill's letters to his wife, with their wide span of personal, political, domestic and philosophic reflections, as well as their uninhibited reports on the events of the day, have been published here in full.”

“Presumably the volume is intended primarily for university libraries and historical research, but, on dipping into its pages, I found it fascinating to read on and on. The main reason, I think, is that these were the years when Britain, perhaps for the last time, crucially affected world history by moving towards the bold decision to resist Hitler, as against Chamberlain's policy of Appeasement.” T. R. Fyvel The Observer