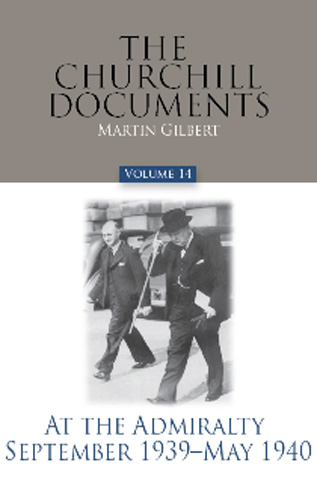 The letters and documents reproduced in this volume were written between the outbreak of war in
September 1939 when Churchill served as First Lord of the Admiralty, and Churchill’s becoming
Prime Minister in May 1940, the period of eight and a half months covered in the first part of
Volume VI, Finest Hour.

During those eight and a half months, as First Lord of the Admiralty, Churchill was responsible for
protecting Britain’s Expeditionary Force to France and supervising the daily war effort of the Royal
Navy. As a member of the War Cabinet, he was concerned with every aspect of war policy at home
and abroad, including rationing, censorship, morale, relations with the United States, the fate of
Poland, the future of France, and the essential acceleration of Britain’s war effort.”

14 March 1940, Lord Camrose: Notes of a conversation with Winston S. Churchill, from the Camrose papers:
“Confirmed what Kennedy had told me: that Sumner Welles was impressed with Hitler, liked
Goering and took an instinctive dislike to Ribbentrop. He also told me that the crew of the last
submarine taken screamed and yelled in fear of what they thought was going to happen to them.
We have now adopted a new procedure in regard to German ships when attempt are made to scuttle
them. A boatload is ordered back to the scuttled ship to try to save her. The men of a boat recently
ordered back in this way went down with the ship, not being able to stop the leaks in time. Mr
Sumner Welles has been told by the Allies that peace was regarded as impossible at the present time
except through victory in the field.”

“Ten years have passed since the publication of the previous volume of Churchill documents,
spanning the three years leading up to the Second World War. Since then, all eight narrative
volumes of the biography have been completed, taking Churchill story to his death in 1965, at the
age of ninety, as well as the single volume Churchill, A Life. The document volumes now under
preparation will cover the years from 1939 to 1965. The last will include a number of important
letters that only emerged after the publication of earlier volumes.”

“A major addition to the vast Churchill literature.” Publishers Weekly
“Under the expert hand of editor Gilbert, Churchill's official biographer, the problems,
uncertainties, and solutions of Britain's response to Germany's invasion of Poland come to life.
Profusely footnoted, this offers a proper mix of official and private correspondence, cabinet
meetings and colleagues' recollections. Every aspect of Britain's gearing up for war is included
here, from construction designs for mock warships to the increase in soldiers' rations. This volume
culminates in the disastrous British response to Hitler's invasion of Norway, which nearly ousted the
First Sea Lord from office. Instead, the German invasion of Holland and France catapulted him to
Prime Minister. Strongly recommended.” Library Journal