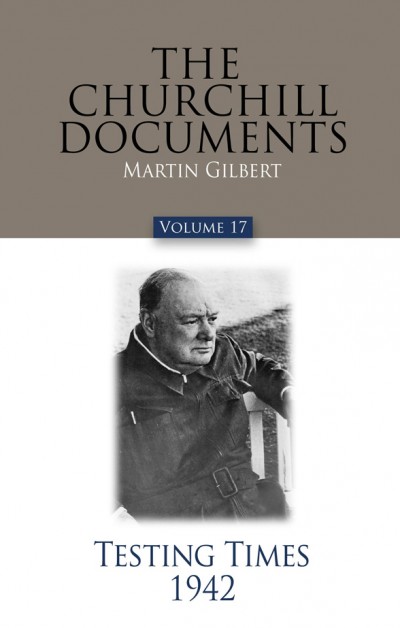 The most recent addition to the multi-volume Churchill biography, made up of ‘the raw material of history’ the letters, notes, memos and records that make up the paper-trail of Churchill’s war effort during 1942. It is these documents that were the basis for the writing of Volume VII, Road to Victory, 1941-1945.

“The Minister of War Production said that all that M Stalin was asking for was recognition of his frontiers as they had existed in June, 1941, when Germany had invaded Russia. At the same date we had made a Treaty with Russia which had wiped out everything which had passed between our two countries up to that date. M Stalin had, however, qualified his request for recognition of the 1941 boundaries on the West by making it clear that these boundaries would be subject to a special arrangement so far as Poland was concerned. Moreover, these frontiers were necessary for Russia's security and security was one of the factors dealt with in the Atlantic Charter. We should therefore (subject to the views of the United States on this subject) agree to M Stalin's request.”

The Minister for War Production was Lord Beaverbrook.

Volume 17 is magnificent. Thank you very much for it and for opening up so much history for me over the past four decades.

In the words of the foreword by Larry P. Arnn “this volume holds a rich account of these events, cataclysmic and glorious in alteration. One can see the statesman grappling with enormous difficulties, guessing the future, taking enormous risks on inadequate knowledge ... Sir Martin believed that the story is found nowhere if not in the writings of the time, and that its drama is fully apparent only in those sources. Here the records of Churchill’s war effort in 1942 are published in unprecedented detail.”