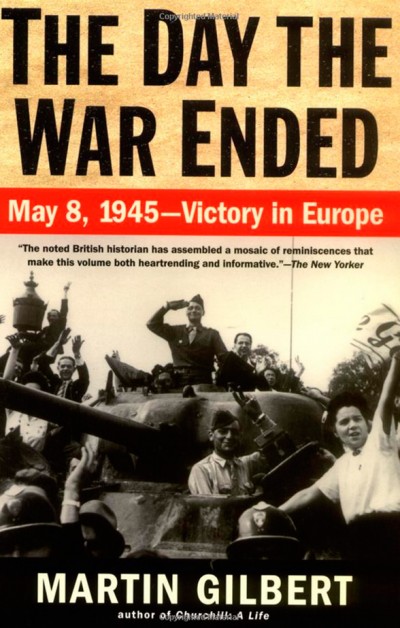 The story of May 8, 1945, the day the Germans surrendered and the Second World War in Europe
came to an end, is recounted through archival documentation woven together with the diary entries
and letters of soldiers, sailors, and airmen, combatants and civilians, young and old, prisoners of
war and resistance fighters, the liberators, the liberated, and the defeated describing where they
were on that day. A moment-to-moment account of that day along with the day’s events that led to
changes in the post-war landscape that were to affect the rest of the century.

“All over the world the news of the unconditional surrender was sparking strong emotions. In the
African city of Brazzaville, where General Charles de Gaulle had raised his standard of defiance in
1941, Natasha Kounin was working in the news department of the Free French radio station. 'My
colleagues and myself awaited eagerly for the last seventy-two hours the imminent announcement
of Germany's unconditional surrender,' she later wrote. 'I happened to be the responsible editor for
the shift, and will never forget the overwhelming emotion which engulfed all of us when the long - awaited
dispatch fell on my desk. It seemed as if six years of nightmare had come to a “happy end”
…. We wept, laughed, drank and danced all the night.' ”

“The material on which I have drawn comes from four main sources: archival material, much of it
letters and documents originating on VE-Day itself; the newspapers of the time, including eyewitness
reports of war correspondents; published diaries, memoirs and histories; and the
recollections of more than two hundred individuals who wrote to me while I was working on this
book. The range of sources reflects the range of witnesses to that memorable day and the days
around it. …

“My own recollections are vivid: at the age of eight and a half, just outside Oxford, I listened to the
King's victory broadcast and then hurried up the hill to watch the burning in effigy of Hitler and
Mussolini. On the following day my friends and I solemnly stuffed our model aeroplanes with
cotton wool, lit the wool with matches, and threw the planes up into the air to their destruction.”

“The noted British historian has assembled a mosaic of reminiscences that make this volume both
heartrending and informative. Gilbert's sources collectively recapture far more than most people
learn in school – and more than most people can remember – and they show, through the experience
of individuals, what global war was like.” The New Yorker
“Out of the nightmare, out of the endless tattered processions of refugees, the division victorious
and defeated milling this way and that, the vile prisons festering with disease, a thousand pungent
details and incongruous names leap out of the pages.” Jan Morris, London Independent