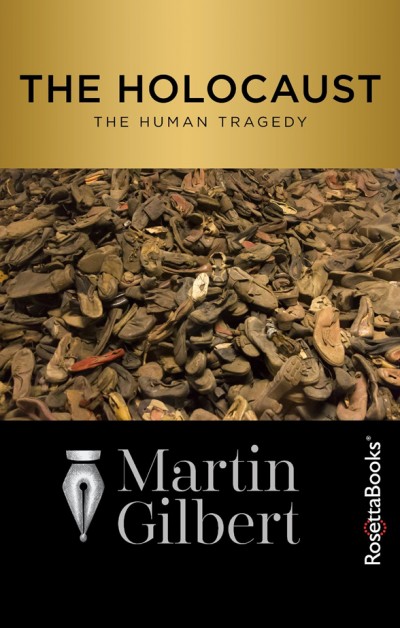 The murder of six million Jewish men, women and children during the Second World War was a crime of unprecedented and unparalleled bestiality. Since the end of the war evidence of the savage cruelty of the murderers has emerged in every country in Europe, and from each one of the many thousand destroyed communities. Jews were sought out, hunted down, tortured, deported and murdered. The aim of the killers was that not a single Jew should survive. But some did survive, and many documents also survived: the often copious records of the murderers themselves, and the diaries and notes of thousands of those who were about to be killed, but who managed to set down as best they could an account of events which they saw around them.

This comprehensive history of the Holocaust from the rise of Hitler to power in 1933 to the defeat of Germany in 1945 is based on German and Jewish documentation, including material collected for the Nuremberg, Eichmann and other war crimes trials, with further personal testimony of eye-witnesses and survivors, and interviews conducted by Sir Martin.

“On September 6, at Birkenau, Salmen Gradowski, a member of the Sonderkommando, who had been in Auschwitz since February 1943, collected together the notes which he had managed to write over the previous nineteen months describing his deportation and first day at the camp, and buried them. … In his covering letter he wrote:

“ 'Dear finder, search everywhere, in every inch of soil. Tens of documents are buried under it, mine and those of other persons, which will throw light on everything that was happening here. Great quantities of teeth are also buried here. It was we, the Kommando workers, who expressly have strewn them all over the terrain, as many as we could, so that the world should find material traces of the millions of murdered people. We ourselves have lost hope of being able to live to see the moment of liberation.' ”

"Page after page of suffering and testimony seem to never end but your writing personalises this suffering without any sense of repetition. I feel it is a chronicle that has to be read completely as to skip and leave this or that out would do an injustice to those whose suffering is recorded.Thank you for this book. Thank you for enlightening people who might find it too easy to forget man`s capacity to do evil. History sadly has tried to repeat itself. To paraphrase Burke the only thing necessary for evil to prevail is for good men to say nothing." S.J . McHugh

“I have just completed reading your book The Holocaust. I had previously read various smaller works. You have done a great service in setting out in such detail the unbelievable horror of the Holocaust. It is so important that the world should know the appalling story. I cannot understand that there seems to have been scarcely one German, SS man, etc. who questioned or took action to attempt to halt the atrocities. Where was their humanity or consciences? An unbelievable, appalling nightmare for humanity. Thanks for your research and insights.”  Tom O'Connell

“Love all your books dearly. You are truly a walking encyclopedia of the Twentieth Century. Your study of the Holocaust is one of the most frightening since Leon Uris` cinemagraphic flashback narratives in Exodus.”  Steven Sittenreich

“This book is an attempt to draw on the nearest of the witnesses, those closest to the destruction, and through their testimony to tell something of the suffering of those who perished, and are forever silent.”

“...well-organized product of energetic and meticulous research. ...This horrifying and compelling book is a fearful record of what anti-Semitism can do.” Paul Johnson, The Wall Street Journal

“It is testimonies, culled from archives in many countries, from personal interviews and from an enormous literature in several languages, that give this book its immediacy and overwhelming impact...It is Mr Gilbert's impressive achievement to remind us of ordinary human beings living and suffering behind the mass anonymity of statistics...” The New York Times Book Review

“This book may come to be considered the classic work of witness and testimony. … Gilbert has allowed hundreds of victims – both those who ultimately survived and those who did not – to give witness. By so doing, he has once again denied Adolf Hitler and his multitudes of henchmen a posthumous victory. For that reason, The Holocaust may constitute this historian's most important work.” Deborah Lipstadt, “Bookmark”, Hadassah Magazine