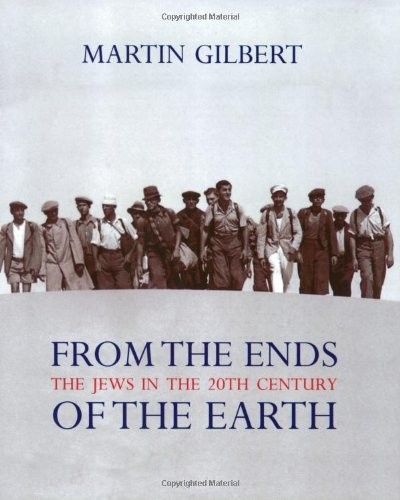 In a text interwoven with and illuminated by more than 400 fascinating photographs, many of them never before published or long forgotten, we meet the widely dispersed turn-of-the-century Jewish communities of Europe, the Middle East, and Asia.  Then we encounter the impassioned Zionists who set out to reclaim Palestine, and the immigrant waves that poured out of Eastern Europe in search of a better life.  The Twentieth Century saw many dark years during which the Jewish people suffered pogroms, persecution and mass murder.  But the century also saw the renewal and flourishing of the Jewish community, in Israel, in America, and throughout the Diaspora.  The observant, the secular, the people gathered from the ends of the earth – all figure in the vivid portrait of the Jews at the dawn of the Twenty-first Century.

On the First World War:  “By the time Italy and the United States had both been drawn in, Jews from every warring nation were fighting in the armed forces on both sides of the European divide.  The scale of Jewish participation in the First World War was considerable.  Of more than 1,500,000 Jews who fought in it, 140,000 were killed.  Their graves, often marked with the Star of David carved into the headstones, are to be found in the war cemeteries in every war zone, particularly on the Western Front.

“For the Jews, as for so many peoples, the First World War proved a turning point, leading to the creation in its early months of a specifically Jewish fighting force which was to make a major contribution to the prospect, even before the war ended, of a Jewish National Home in Palestine.  As well as their role as soldiers, individual Jews were also prominent in the call for an end to war, and in the struggle to create a new world order, either to bring the conflict to an end by workers' strikes and world revolution, or to see new democratic nations emerge on the ruins of the fighting empires, or to make future conflicts impossible.”

“Jews have been variously portrayed, and have portrayed themselves, as a religion, a race and a nationality.  According to Jewish rabbinic law, anyone with a Jewish mother is Jewish.  People born Jewish, or having Jewish ancestry might convert to Christianity, or to any other religion, yet still be considered Jewish under rabbinic law.  Under Hitler's definition (which sent millions of people to their deaths) anyone with one Jewish grandparent was Jewish.  Anyone who considers himself or herself of recent Jewish antecedents might be defined as a Jew.  Since 1951, any Jew who wishes to do so may enter the State of Israel and become a citizen on request.  This 'Law of Return' has enabled more than two and a half million Jews to go to Israel and live there as citizens, and as 'Israelis'.  Other Jews, while openly defining themselves as Jews, whether religiously observant or not, are content to be 'British' or 'American' or 'French', depending on their nationality and citizenship.  No Jew has to go to synagogue, or be a member of any formal Jewish community, or even appear on the statistics of the number of Jews in a country, to be Jewish.  Throughout the Twentieth Century, individual Jews who did not in any way proclaim their Jewishness made their mark on the life and society around them, as much as those for whom being Jewish was a vital part of their identity and even self-esteem.  It is the struggles, hopes and achievements of all Jews, in every land, that are portrayed and celebrated here.”

“... this 100-year chronicle of Jewish history, practice, culture, art and survival is informative, succinctly written and handsomely produced.  Gilbert, the official biographer of Winston Churchill and noted historian, has written a text that carefully and lucidly intertwines an enormous range of people, events, themes and ideas.”  Publishers Weekly

“... an invaluable and accessible resource, a panorama of some of the major milestones, and dilemmas of the last century enhanced by the wisdom and perspective of an eminent historian.”  Emma Klein, The Tablet

“Gilbert attempts to remind us who we are, and where we are from.  He does it with consummate success.  And the photographs, from all over the world, of all kinds of Jews, are an unmitigated triumph.”  The Times