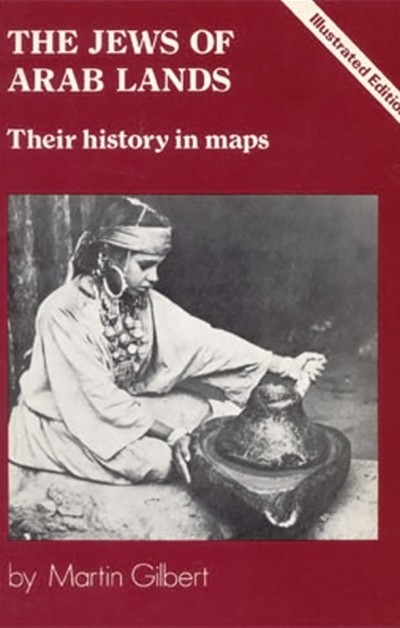 A slim atlas of fifteen maps outlining Jewish communities in the Middle East before Islam, and then charts their communities in ten countries up to 1975, including Jewish refugees who made their way to Israel after it was established, and Arab refugees from what is now Israel.

“Between 1950 and 1974 the total of Israel's annual contributions to the Arab refugees, through the United Nations Relief and Works Agency, was higher than that of any Arab or Muslim state, with the exception of Egypt and Saudi Arabia, both of whom gave amounts similar to those given by Israel.  Algeria made no contribution.”

“By far the slimmest of Martin Gilbert's published eight historical atlases is … The Jews of Arab Lands:  Their History in Maps.  Yet it bears a story which a bulky tome could have hardly told more vividly and more dramatically.  'History at a glance' often tends to border on the superficial; this is a hazard inherent in the difficulty of handling the vast material and, moreover, of finding the proper yardstick for selecting from it. This hazard is more than matched by Mr Gilbert's scholarship and lucidity.  Here, for the first time, the reader is given, concisely and clearly, a delineation of the course of the Jewish communities in the Arab countries.  It is a gripping and depressing story, as the 'dry' facts and figures combine into the sordidly familiar pattern of Jewish dispersion:  of flourishing and creative Jewish communities greatly contributing to the development of their countries and faced with the contiunual threat of persecution, discrimination and violence.”  Joshua Justman, Jerusalem Post Magazine