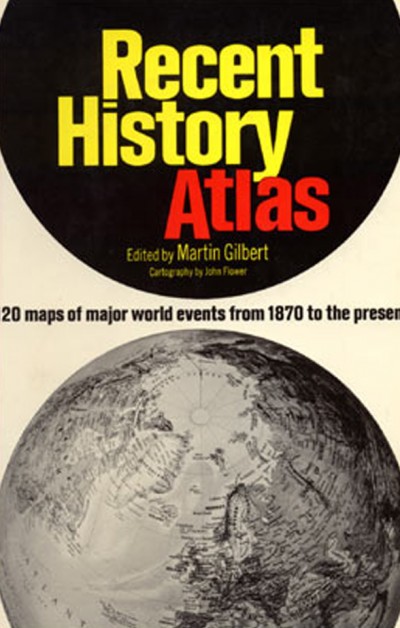 First published in 1966, this first of Sir Martin’s historical atlases shows, in 121 maps, the historical
development of the world from “The European Empires in 1870” to “American Preparedness Since
1960”. Also included is a decade by decade timeline (and notations of which map shows the event)
for Great Britain, Germany, France, Italy, U.S.A., Russia, and “Other Nations”.

“Immigration to the United States 1830 -1910” which shows the numbers and countries of origin of immigrants;

“The German Invasion of Poland September 1939” shows the dates and areas occupied by the Germans, and by the Russians;

“The Relative Strength of the Powers January 1939” shows the numbers of battleships, destroyers, submarines, soldiers and aircraft;

“World Health, Illiteracy and Incomes since 1960” shows areas of malnutrition and “States with over 40% illiteracy: statistics supplied to United Nations 1961”.

“Each map has been specially designed to help explain some important episode in recent history. Each continent is given as much importance as the events determine; not only wars and battles, but
also treaties, alliances, population problems and political confrontations are the subject of these maps. …

My aim has been to help the reader grasp at once a wide range of relevant historical points, as clearly and accurately as possible.”

“It is the sort of handbook needed for reference – for reading not only recent history, but the newspapers as well. For example, Map 112 explains where the chief oil wells and pipelines of the Middle East are situated, which country owns them, and how much oil each country produces.” Anthony Arblaster, Tribune