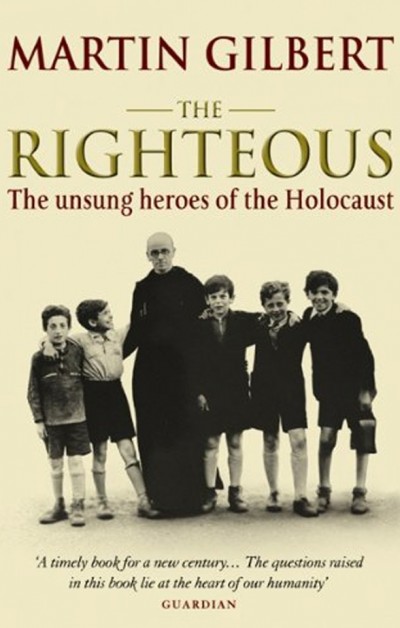 The story of non-Jews, most of them Christian, but also Muslims, who risked their lives to hide Jews during the Holocaust: from the group efforts of the Danish Resistance to transport 8,000 Danish Jews to safety, and the refusal of the Bulgarian Church, parliament and people to allow the deportation of Bulgaria’s 48,000 Jews, to the efforts of brave individuals in every land under German occupation to try to save Jews. The story above all, of more than 20,000 “ordinary” men and women who acted in a decent, humane and life-saving way.

“As to her motive in helping save Jews in France, Jeannette Brousse commented:  'I felt horrified by the atrocious fate likely to befall all these innocent victims whose only “mistake” was to have been born Jewish.  I did not know any Jews before these events.  I discovered  they were people like us, even though some influential newspapers presented them as scapegoats for all evils.  I was determined to find solutions so that the greatest number of those who came to me could be saved.' ”

“The many survivors who have written to me about their rescuers feel strongly that these individual, selfless acts – the acts whereby they were saved – have not entered sufficiently into the general histories of the Holocaust, or indeed of the Second World War.  Put succinctly, as they see it, and as the material presented in this book surely underlines, human decency was also an integral part of the war years; and it was a dcecency that, had it been on an even larger scale, had it permeated even more deeply into the societies of that time, could have saved many more lives – thousands, even tens of thousands.  The story of the Righteous is not only a story of the many successful individual acts of courage and rescue; it is also a pointer to what human beings are capable of doing – for the good – when the challenge is greatest and the dangers most pressing.”

“As a researcher and collector of historical source material, Mr Gilbert has no peer among contemporary historians; a man of awe-inspiring initiative and indefatigable productivity, he will leave no stone unturned in his searches.  … Mr Gilbert's book is a work of deep commitment; more than that, a labour of love.  It deserves to be read side by side with the studies claiming that there were no rays of light, no manifestations of humanity and goodness in those dark days.”  Walter Laqueur, The New York Times

“The power of the book comes from hope rising from rescue or despair meeting ineffable cruelty.  But, above all, this is a testimony to the power of goodness in the face of evil.  … It shouts one magnificent theme:  that man is capable of the highest, most edifying altrusim in the face of unspeakable cruelty.  It whispers a more unsettling question.  In the midst of the mayhem of the Holocaust, in the turmoil of the fear of retribution from the authorities, what would I, the reader, have done?”  Hugh MacDonald, The Herald, Glasgow

“This book is proof that to generalize about a people is a falsity.  Humanity and goodness have no borders.  It should be a teaching tool in all schools as an example and guide for the future of this world."  Leon W. Wells, Centre for Interreligious Understanding