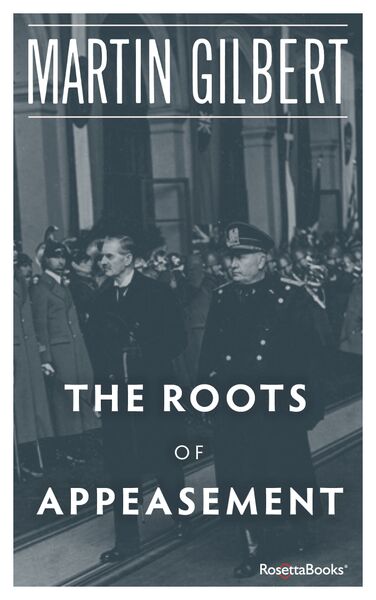 This book traces the origins of “appeasement” in British foreign policy, and follows its troubled and at times turbulent course from the First World War to 1939. It emphasizes that appeasement was
not a coward’s creed, but a constructive, realistic policy based upon British interests, and a search for European peace and harmony, a policy that evolved from a courageous, bold one to one increasingly marred by doubt and uncertainty.

“On 4 August 1914, following Germany's invasion of France and Belgium, Britain declared war on Germany. …On that day, amidst the anguished cries of 'why?', appeasement was born.

Educated people in all walks of life, and of all political beliefs, knew that war between Britain and Germany was a tragic thing, that many lives would be lost, trade disrupted, society disturbed, empires threatened, and the international scene poisoned by hatred and recrimination.

They determined that, when peace came, it should never again be broken; that all disputes should be settled without war, and all legitimate aspirations willingly granted.

“Appeasement was born in the minds of those who said that the war need never have come, that it was accidental, and that neither Britain nor Germany was more responsible than the other for its onset. It was a determination to prevent by all means a second accidental, 'guiltless' war. Appeasement was created by a lack of confidence in the British case, and a resolve never again to drift or fall unwittingly into war.”

“The arguments for and against appeasement were never simple ones, nor did the debate which raged with acerbity for twenty years fall into any clear categories of 'right' and 'wrong'. My aim is to examine the wide range of the appeasement argument, and to show that appeasement, both as an attitude of mind and as a policy, was not a silly or treacherous idea in the minds of stubborn, gullible men, but a noble idea, rooted in Christianity, courage and common sense.

Gilbert has once more produced a brilliant book. The writing is sure and graceful, and the arrangement of the story is at once complex and clear in the manner of a fine, old-fashioned novel. The opinions are strongly held, but firmly separated from established fact so that the reader can, if he wishes, use Gilbert's facts to help form his own opinions.' Donald Mintz, Washington Evening Star

'Mr Gilbert, in this readable and thoughtful book, has traced the origins and development of appeasement both as a policy and as an attitude of mind. He makes useful and long overdue distinctions between government action and public opinion, between political and economic appeasement, between Weimar and Nazi Germany and between a policy based on hope and one based on weakness and despair. The author's emphasis on the different phases of the appeasement mentality makes this volume a valuable addition and an important corrective to much of the available literature.' Times Literary Supplement