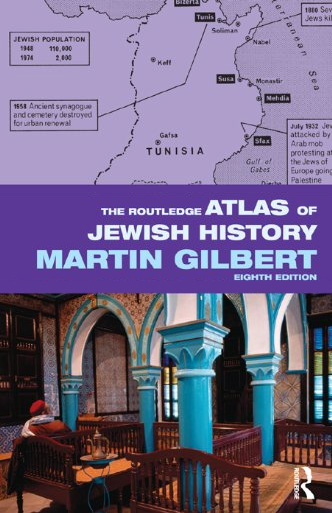 A comprehensive map history of the Jewish people from Biblical times to the Twenty-first Century. Spanning more than four thousand years of history, this historical atlas presents a vivid picture of a fascinating people, and the trials and tribulations that have haunted the Jewish story, as well as Jewish achievements, in 157 specially-drawn graphic maps. The themes covered include prejudice and violence, migrations and movements, society, trade, culture, politics, population and philanthropy.

Text on Map “Poverty and Charity Among Russian Jews in 1900”:

“Despite the poverty and pressures of life in the Pale, the years 1835 to 1914 saw a great flourishing of Jewish literary, cultural, political, educational, journalistic, religious and spiritual activity.”

“Among the charitable societies organised by the Jews were those to supply poor students with clothes, soldiers with kosher food, the poor with free medical treatment, poor brides with dowries and orphans with technical education.”

"I was trained as a theatrical costume designer and have only begun formal research in the past few years as a result of a finding I made while investigating material for a production. In brief, my research is on the use and depiction of yellow in Jewish dress as an identifier.

My research contradicts common thought that it was first considered a negative color "the color of Judas' robes" and, as a result, then imposed on Jews. However I have quite a bit of evidence to support that it stems back, instead, to the Jewish saffron trade that goes back to antiquity.

Sir Martin's book has been a wonderful find because, like my research, his maps span millennia and continents. So it is providing me with an wonderful, easily navigate-able visual reference to help locate where Jewish communities were located throughout history".

“In this atlas I have tried to look at the role of the Jews in their different national settings, and show their reaction to persecution, whether by dispersal, acceptance or defence. Both in resisting the continual pressure of hostile societies and in braving the dangers of flight and exile, the Jewish people have shown high courage and a keen capacity to rise again; 'trampled into the dust' as Cardinal Manning described it, 'and yet never combining with the dust into which it is trampled.' ”

“Ranging from 2000 BC to AD 2000, this is an unusual and compelling insight into Jewish history, from the first biblical migrations through diaspora, persecution and Holocaust to the modern State of Israel.” Fergus Collins, BBC History

“There is probably not a single person, Jew or Gentile, scholar or layman, who will not find Gilbert valuable and fascinating, and it is the best possible introduction to Jewish history imaginable.” S. Benaron, The Jerusalem Post

“... it is hard to conceive of any other work, textual or graphical, conveying so much information on Jewish history in as accessible and digestible form.” Reference Reviews