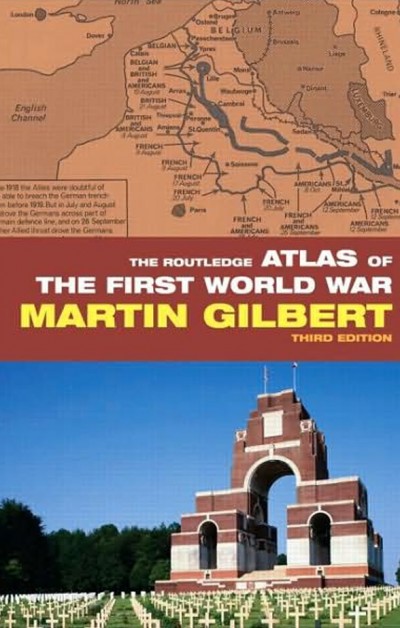 From its origins to its terrible legacy, the course of the First World War is vividly set out in a series of 173 maps. Together, these maps form a comprehensive and compelling picture of the war that devastated large parts of Europe, destroying three Empires; these maps illustrate the military, social, political and economic aspects of the war. The Atlas covers the early months of the war, the developing war in Europe and beyond, the war at sea and in the air, life at the front, court-martial executions, technology and the intensifying war, the home fronts, and the aftermath. Each of the eight wartime sections is introduced by a contemporary poem. The volume includes a Bibliographical note and itemised Index

“The Imperial (now Commonwealth) War Graves Commission maintains 2,500 military cemeteries in France and Flanders. The land for these cemeteries was given in perpetuity by the French and Belgian people. Among those buried in these cemeteries are troops from Australia, Britain, the British West Indies, Canada, China (Labour Corps), Egypt (Labour Corps), India, Newfoundland, New Zealand, and South Africa.”

“This Atlas is intended as an introductory guide to as many aspects of the First World War as can reasonably be put in map form: the military, the naval, the aerial, the diplomatic, the technical, the economic, and pervading all, the human.

“Many of the subjects mapped here, although written about elsewhere, have not been put in map form before. But it is my hope that the visual aspect of a map such as German War Aims in the West 1914-1918 (Map 124), or British Supplies to the Allies 1914-1918 (Map140) can be as useful, and as revealing, as the printed form … and can give an unexpected interest to problems, which, because of their unfamiliarity, do not always find a place in general histories of the war.”

“For most historians, maps and diagrams are useful adjunct to the text. Mr Gilbert has pioneered a technique of making them serve as an 'introductory guide', accompanied by only a minimum of explanatory notes... Mr Gilbert has used his material with skilful and sometimes dramatic effect.” Times Literary Supplement

“... presents a mass of familiar and far less familiar information simply and tellingly. Fortunately, it is as much concerned with the political, economic and social aspects of the First World War as with the campaigns.” Economist