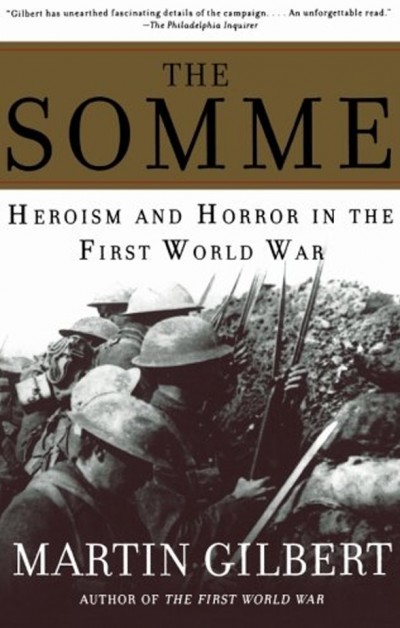 The battle of the Somme was one of the most costly battles in the history of warfare. On the first day alone, 19,240 British soldiers were killed and more than 36,000 wounded. Between 1 July 1916, when it began at the height of summer, and 19 November 1916, when it ended in the snow and fog of winter, more than 300,000 British, Commonwealth, French and German soldiers had been killed, and twice that number wounded.

The area of the battlefield is small: fifteen miles in length and six miles at its greatest depth. Today it is an area of peaceful rolling hills, woods and cultivated fields, with its once obliterated villages rebuilt. It is also an area of scattered war cemeteries, and other memorials to the battle.

What happened on the battlefield? Why was the battle fought in the first place? Why was it so prolonged, at such heavy cost? What was its impact on the wider war? These questions have haunted survivors of the battle, the relatives and friends of those killed, and those born long after it. Poets, historians, writers, novelists, journalists, film-makers, teachers and schoolchildren have been among those drawn to its story.

“At five in the morning of 1 July 1916, the first British air reconnaissance of the day took place over German lines. Before the battle on the ground began, British aircraft were bombing German railway yards, cuttings and bridges far behind the lines. Béthune and Cambrai were both targeted. Each bomber carried two 112-pound bombs.

Then, starting at 7 a.m., nearly a quarter of a million shells were fired at the German positions in just over an hour. This was an average of 3,500 shells a minute. So intense and so loud was the barrage that it was heard on Hampstead Heath in north London, almost two hundred miles away. It was an astonishing sound, as guns of all calibres fired simultaneously. In some parts of the line British soldiers sat on their parapets cheering at each explosion, but their enthusiastic shouts were lost in the thunder of the guns. The sound was so intense that if a man screamed at the top of his voice into another man's ear, he could not be heard. One officer tried to count the detonations by his watch, but this proved impossible. Instead, he tried chattering his teeth, which he could click about six times a second. This was not enough to keep up with the rate of fire.”

“To avoid anonymity, I have given wherever possible the names of the individuals whose stories are told on these pages. To enable the reader who might visit the battlefield to pay his or her respects at the graveside, I have also given the names of the cemeteries in which many of the individuals lie, or the monument to the missing on which their names are listed. Were one to write a third of a page about every soldier killed on the Somme, it would require at least six hundred books as long as this one.”

“A steadily astonishing piece of work that acts as a worthy remembrance.” New York Post

“A brilliant evocation of the battle in poetry, letters, maps and personal stories; and it is also a threnody, a song of lamentation.” The Times (London)