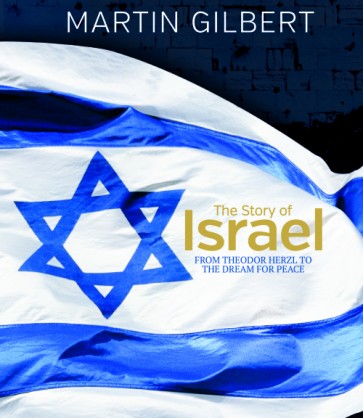 Rich in illustrations, facsimile documents, photos and maps depict Israel’s history from the first Zionist Congress in Basel in 1897 through the first decades of the Twenty-first Century. In addition to Sir Martin’s original choice of documents, new photos have been added to his authoritative text, all now beautifully printed on the pages of this new edition.

Among the 40 facsimile documents included are these:

The “Balfour Declaration” which stated a “declaration of sympathy with Jewish Zionist aspirations” written by Foreign Secretary Arthur Balfour to Lord Rothschild, 2 November 1917.

President Harry S. Truman's personal diary entry for 21 July 1947, after a discussion with Henry Morgenthau on the fate of the Jews on a ship carrying them back to the Displaced Persons Camps in Europe.

The Law of Return, passed on 5 July 1950 establishing the right of any Jew, from anywhere in the world, to immigrate to Israel, the only exception being those “engaged in an activity directed against the Jewish people” or “likely to endanger public health or the security of the State”.

Martin Gilbert, the most distinguished British historian, published many books and articles about Israel and the Jewish people. I recently read this book and was deeply impressed by its design. This is one of the most beautiful history books I have seen. Evidently much thought was invested in its production, collection and presentation of material.

The book contains photos, copies of important documents, inserts of envelops with anecdotal, surprising information, maps, posters, letters. It is a very rich, special book for people who love Israel and wish to tell their children the story of Israel in a succinct, loving way. This book was prepared with love and presented to you in such a way that you will be sure to love it and show it to your loved ones.

“Israel was established so that Jews anywhere in the world, out of need or choice, could have a homeland of their own. After independence, that process began with the ingathering of more than half a million Jews from the Arab lands, a massive undertaking.

“Five wars tested Israel's ability to survive. As Communism disintegrated, more than a million Jews emigrated from the Soviet Union. Despite war and terror, Israel has sought peace through both secret and public negotiations. These efforts continue to this day despite the ongoing Arab-Israel conflict. Through all of this, Israel remains a vibrant Jewish State and Jewish homeland.”