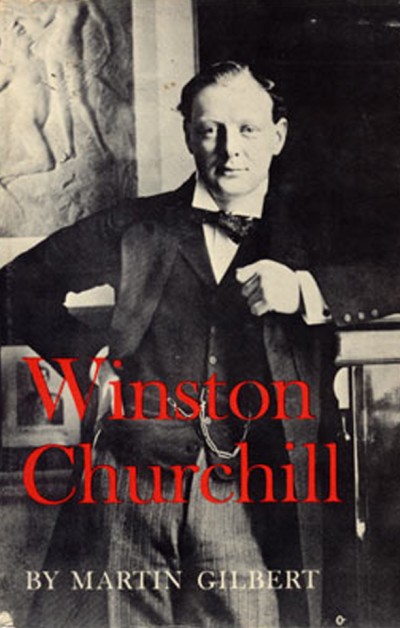 Sir Martin’s first book about Churchill, published originally as one of The Clarendon Biographies, this slim volume is an introduction to Winston Churchill and his life. Schoolchildren and those interested in a basic and concise biography will find it essential reading.

“In 1873 Jennie visited England and went to Cowes, in the Isle of Wight, for the sailing season.
The central social event was a ball given on board the yacht of the Czarevitch, the heir to the throne
of Imperial Russia. Here Jennie waltzed with a young Englishman who disliked dancing and,
becoming dizzy, asked her to sit down. He talked; they dined together the following night, and on
the third evening of their acquaintance he asked her to marry him. …

Gilbert on Churchill: “His greatest strength was his creative genius. Whatever interested him, he
worked upon until he understood it fully and then played his inventive mind upon it. He had tried
as a young politician to create a working system of social legislation which would eliminate harsh
or unnecessary inequality. Before two wars he had wished to build up the national defense in order
to deter aggression. He hated war, having fought in many battles, and he strove in countless ways
to prevent war during his long career. He repeatedly opposed the imposition of harsh terms on
defeated nations. But many envied his energy. His creative zeal was often ridiculed and his
proposals were frequently regarded with contempt. Perhaps no man in public life has been right so
often, yet so maligned.”

What the press say: "...a marvellous story to tell...may find a place in many school libraries..." T.H. McGuffie, The Teacher

"...in sympathy with his subject, he has no real bias and takes a detached and detailed view...clear and informative." Times Educational Supplement