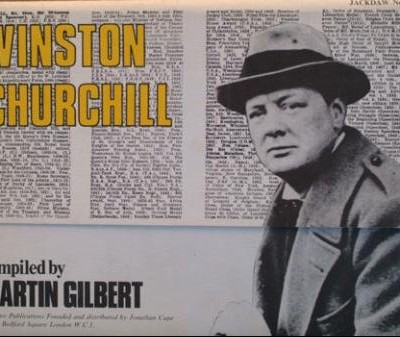 A leaflet entitled “Beating the Invader” of 1940, with directions for the British people in case of
invasion:

“Throughout the rest of the country where there is no fighting going on and no close cannon fire or
rifle fire can be heard everyone will govern his conduct by the second great order and duty, namely
'CARRY ON'. It may easily be some weeks before the invader has been totally destroyed, that is to
say, killed or captured to the last man who has landed on our shores. Meanwhile, all work must be
continued to the utmost, and no time lost.”

From a photo caption:

“Churchill with French officers at the time of his military service on the Western Front in 1916. He
has replaced his British cap with a French helmet. He spent nearly six months in the front line.”

“... the contents of this folder provide enough to whet the appetite of anybody wishing to know a
little about the great man … history is brought to life when we can see reproductions of works
associated with the individual concerned. Certainly these should make younger readers wish to
read some of the books by Sir Winston Churchill, as well as those written about him by others.”  Kent Life