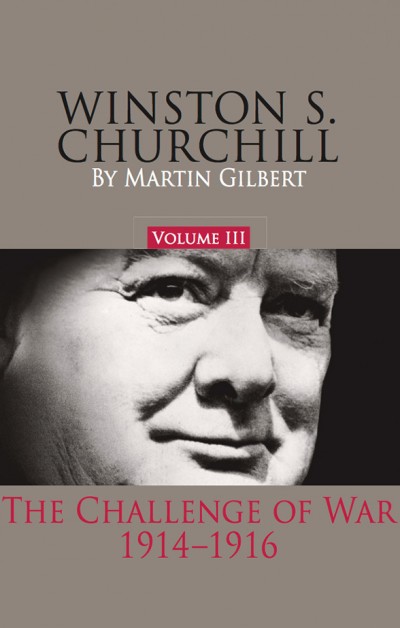 When Randolph Churchill died in 1968, he had completed the first two volumes of this multi-volume biography of his father. Martin Gilbert, an Oxford historian who had been one of Randolph’s researchers, was asked to take on the completion of the biography. This volume (number three of the eight volumes of narrative biography) was published in 1971, and brought back into print by Hillsdale College Press in 2008.

“What about the Dardanelles?” This was the cry which Churchill was to hear so often between the two world wars. It epitomised the distrust with which he was widely held as a result of the naval setback at the Dardanelles in March 1915, and the eventual failure of the Gallipoli landings launched the following month. By examining in detail the complex evolution of British war policy, this volume shows that the precise nature of Churchill’s involvement and responsibility differed greatly from what his contemporaries believed and from what quickly become popularly accepted.

“During his first two months in command of the 6th Royal Scots Fusiliers Churchill found little time for anything but his military duties. But fifteen years of intense political activity were not to be obliterated by mud or noise or danger. Throughout January and February he had been alerted, not only by the shriek of Germans shells but by political news from home.”

“I have tried wherever possible to find the original text of every document quoted in this volume, because in many instances I have discovered large discrepancies between the original document and later published versions. This is particularly true of official documents and telegrams printed for the Cabinet or published subsequently in Government collections of documents; in these, sentences thought to be damaging to security or embarrassing to the Government were often omitted or altered. Many published diaries and private letters also differed considerably from their original versions, authors and editors at times omitting materials without any indication being given that they have done so, and on occasions contemporary judgements being deliberately altered to accord with hindsight.”

“Mr Gilbert, who worked with Randolph for several years before his death, is an exceptionally gifted historian with the zest to ferret out every kind of source materials and the skill to analyse and to interpret them cogently and convincingly.” Asa Briggs, Guardian

“Whoever made the decision that Martin Gilbert should succeed Randolph Churchill as the official biographer of Winston Churchill deserves a vote of thanks from the nation. Nothing less seems sufficient … masterly, monumental, sympathetic without being sycophantic – and utterly absorbing, not only for the intrinsic interest of that period, but for the gleam of light it throws across the whole of Churchill's career.” Michael Foot, Evening Standard