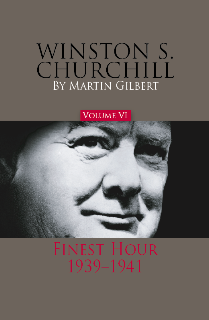 This volume starts with the outbreak of war in September 1939 and ends with the Japanese attack on Pearl Harbor in 7 December 1941, and the German and Italian declaration of war on the United States three days later. On the day Hitler invaded Poland, Churchill, aged sixty-four, had been out of office for ten years. Two days later, on 3 September 1039, he became First Lord of the Admiralty, in charge of British naval policy and at the centre of war direction. On 10 May 1940, he became Prime Minister, leading his nation during a time of grave danger and setbacks. His first year and a half as Prime Minister included the Dunkirk evacuation, the fall of France, the Battle of Britain, the Blitz, the Battle of the Atlantic, the struggle in the Western Desert, and Hitler’s invasion of the Russia.

“Churchill had spoken for just under half an hour. As he ended, the whole House rose to its feet, cheering and waving Order Papers, 'as I have so often seen them do for Neville,' one MP noted. 'Only it was not little Neville's turn now.' And he added: 'Winston suddenly wept.'

“John Martin later recalled: 'I was in the House for the Oran statement, when all (except, I think, the ILP members) rose and cheered for several minutes. There had been nothing like it, people said, since Munich. Churchill himself was quite overcome and his eyes filled with tears.'

“Nine years later, Churchill himself recalled this emotional scene, 'a scene unique', he wrote, 'in my experience'.”

“My aim in this volume has been to tell Churchill's personal story, from September 1939 to December 1941. Since the war, many diaries, memoirs and historical accounts have been published about these years, including the first three volumes of Churchill's own memoirs. Each of these books has given its own insight. I have tried to weave together all the available sources, unpublished as well as published, to present a new perspective on Churchill's contribution, setting his thoughts and policies, his hopes and fears, in the context of the daily, and at times hourly, pressures of war.”

“As a jumbo-biographer of Churchill, Mr Gilbert will probably never be excelled. His mastery of sources and sense of historical context give his work unique and lasting value.”Spectator

“This volume stands out as one of the very best Gilbert has produced in this monumental series.” Financial Times