The systematic attempt to destroy all European Jewry – an attempt now known as the Holocaust – began in the last week of June 1941, within hours of the German invasion of the Soviet Union.  This onslaught upon Jewish life in Europe continued without respite for nearly four years.  At its most intense moments, during the autumn of 1941, and again during the summer and autumn of 1942, many thousands of Jews were killed every day.  By the time Nazi Germany had been defeated, as many as six million of Europe’s eight million Jews had been slaughtered:  if the killing had run its course, the horrific figure would have been even higher.

Jews perished in extermination camps, execution sites, ghettos, slave labour camps, and on the death marches.  The testimony of those who survived constitutes the main record of what was done to the Jews during those years.  The murderers also kept records, often copious ones.  But the victims, the six million who were done to death, could leave no record.  A few fragments of diaries, letters and scribbled messages do survive.  But in the main, others must bear witness to what was done to the millions who could never tell their own story.

On This Day: 8 December 1941, The first gassing at Chelmno

“The place chosen was a wood near the Polish village of Chelmno; the victims were Jewish villagers from several nearby communities.  The method chosen was to bring the Jews by narrow gauge railway from Kolo to Powierce, drive them with whips to the river, lock them overnight, without food or water, in the mill at the hamlet of Zawadki … and then, in the morning, drive them in lorries to the woods near Chelmno, gassing them by exhaust fumes during the journey.  The bodies were then thrown into deep pits, while the lorries returned to the mill for more victims.  In all, five lorries were used, three of which held up to 150 people, and two up to 100.  By noon, the whole trainload had usually been destroyed.”

The Routledge Atlas of the Holocaust

Read more about Sir Martin’s inspiration and interest in the Holocaust, his blogs, films and book talks:

The murder of six million Jewish men, women and children during the Second World War was a crime of unprecedented and unparalleled bestiality. Since the end of the war evidence of the savage cruelty of the murderers has emerged in every country in Europe, and from each one of the…

Starting in the early hours of 10 November 1938, and continuing until nightfall, violence against the Jews of Germany was unleashed in a whirlwind of destruction. Within a few hours more than a thousand synagogues were set on fire and destroyed. Where it was thought that fire might endanger nearby…

“In this book I have told the story of how and when the Allies learned of the Nazi extermination of the Jews, and of how they responded. To this end, I have given particular prominence to those atrocity reports which were received in the west during the war itself, and…

Avraham Tory’s chronicle of life and death in the Jewish Ghetto of Kovno, Lithuania, from June 1941 to January 1944, was written under conditions of extreme danger by the Secretary of the Jewish Council, and ghetto inmate. After the war, Avraham Tory was forced to entrust his diary to leaders…

This Atlas presents, through 333 maps, each phase of Hitler’s war against the Jewish people, against all those with Jewish blood or of Jewish descent, wherever they could be found.  It traces the German conquest of territory in which Jews had lived for centuries:  the first random but brutal killings,… 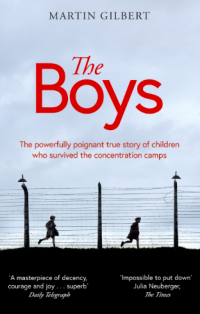 When Britain declared itself willing in the summer of 1945 to take in one thousand young survivors of the Holocaust, no more than 732 could be found.  During the following eight months they were flown from Prague and Munich to Windermere and Southhampton, as well as to Scotland and Northern…

The story of non-Jews, most of them Christian, but also Muslims, who risked their lives to hide Jews during the Holocaust: from the group efforts of the Danish Resistance to transport 8,000 Danish Jews to safety, and the refusal of the Bulgarian Church, parliament and people to allow the deportation…

A history of the Holocaust in 78 two – page spreads, each spread has a specific theme, and is illustrated with photographs, colour maps, art work, recollections, and commemorative postage stamps. Themes include pre-war Jewish life, Kristallnacht, Education and Culture in the ghettos, the Warsaw Ghetto revolt, Escape to the…

This extraordinary and powerful book describes a fourteen-day journey made by the historian Sir Martin Gilbert and a group of London University students of the Holocaust to many of the sites associated with Jewish history before and during the Second World War.  A geographic pilgrimage which is also an excavation…

One of the earliest published historical accounts of what came to be known as the Holocaust, set out in twenty-two episodes or aspects, from The Netherlands and France to Romania and Greece, based on the records kept by eyewitnesses of both the Germans and the Jews.

Published for the Holocaust Educational Trust, this slim atlas chronicles in photographs and maps the scale of the slaughter – six million Jews murdered – the widespread acts of Jewish resistance, the fate of many millions of non-Jews who were also murdered, the often inadequate response of the world outside…

Read more about this book >>
Sir Martin Gilbert is the official biographer of Winston Churchill and a leading historian on the Twentieth Century, who, in his 88 books has shown there is such a thing as "true history".