Sir Martin Gilbert was born in London in 1936 to Jewish parents, Peter and Miriam Gilbert whose own parents came as refugees from Czarist Russia.

In 1939 when the Second World War broke out, as part of a British government scheme to move children from German bombardment, he was sent with his parents to Cornwall. In the spring of 1940, Martin was evacuated with thousands of children to safety in Canada, and travelled with an aunt and her three children on The Duchess of Bedford: he was three and a half years old.

Martin  lived with a foster family in Toronto for four years, and returned to Britain in 1944 as a seven year old. He travelled alone by train from Toronto to New York, and wrote this description to his foster “Aunty” from on board the Mauritania: 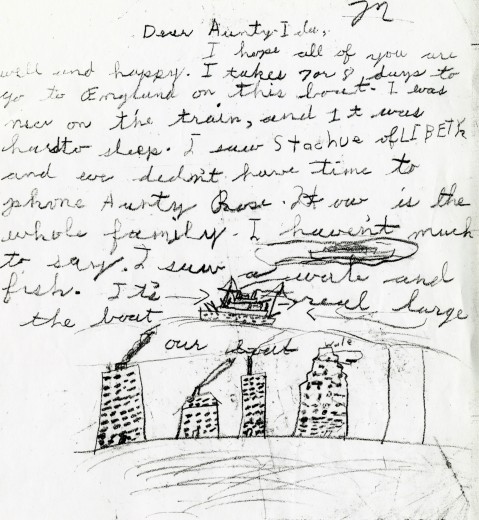 Back in London in 1944, Martin, his parents and a new baby sister were again evacuated, to Wales, where they were when the war ended.

Returning to London, Martin was enrolled in Highgate School, originally as a boarder. He remained at Highgate from 1945 to 1955, throughout his junior and senior years. In 1955, upon completion of his schooling, he reflected on those years in his diary:

I had been at Highgate School for ten years: five in the junior, and five in the senior school. They are years teeming with memories, some pleasant, some painful, some vivid, and some mere glimmerings on a distant horizon. Read more

From 1955 to 1957, Martin did his National Service, first in Bodmin, Cornwall, then in Crail, Scotland. He was in the intelligence Corps, where he learned Russian. In 1957, Martin received a Demyship to Magdalen College, Oxford, graduating in 1960 with first-class honours in modern history. Two years were spent as a Research Scholar at St Antony’s College, Oxford, and then he became a Fellow at Merton, a position he kept until being elected an Honorary Fellow in 1994.  In 1999 Merton awarded Sir Martin Gilbert a DLitt, ” for the totality of his published work.”

I was up at Magdalen  from 1957 to 1960. Unlike so many of my contemporaries, who went into the diplomatic service, journalism, and the law, I stayed on at Oxford for two more years as a research scholar at St Antonys, hoping to become a Sovietologist. Read more

I was fortunate while a schoolboy in London, Immediately after the Second World War, to have been encouraged by my teachers to settle down in the corner with books that were not part of the examination syllabus.

For several months I fell under the spell of Thomas Carlyle’s French Revolution where the extraordinary mixture of dramatic narrative and the use of a vast array of contemporary writing sources-letters, diaries, newspapers-led me within a few chapters to see this as something I would like to emulate.’

The master concerned then got me to read a worthy but dull book on the French revolution by an author (whose name I had better not recall) to show there were different ways of writing about the past.

Following Carlyle, I was settled down with Motley’s Rise of the Dutch Republic where, again, the vivid historical narrative was enhanced by graphic writing, as well as by a strong theme, the defeat of tyranny by national self- assertion.

Poetry written around historical events also made a great impression on me in those early years, with the result that, to this day, I have found inspiration in reading aloud particular poems set at specific moments in history: from the traditionally English schoolboy’s recitation of Byron’s description of Brussels on the eve of the battle of Waterloo from Child Harold, to Siegfried Sassoon’s stark warning of the future of air power in his poem Thoughts in 1932, when he forecast ‘fear will be synonymous with flight.

Thirty years ago I corresponded with Siegfried Sassoon about this poem and this year I reproduced it in full in volume one of my History of the Twentieth Century.

I have also been much influenced by the writings of Jonathan Swift, in particular his satires while never forgetting his own admonition in his preface to The Battle of The Books: Satire is a sort of glass, wherein observers do generally discover everybody’s face but their own.

From For The Love of Books edited by Ronald B Schwartz