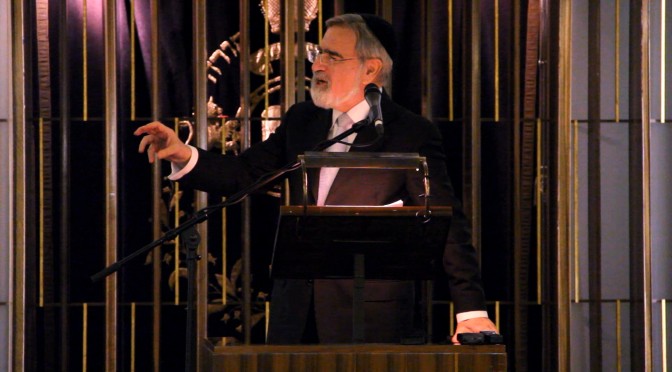 Martin was such a very special person. We loved him, we admired him, we miss him. But I find my mind going back to a moment when it just overwhelmed me what Martin had actually done to earn a place in all our hearts.

It must have been 15 years ago, just before the Holocaust Exhibition was opened in the Imperial War Museum. The organisers of that wonderful exhibition had decided in their thoughtfulness and kindness to invite the Holocaust survivors to a dinner in the Imperial War Museum just a couple of weeks before the Exhibition was opened, so that they could see it first.

I was dreading that moment, I thought it would open up the trauma all over again. I didn’t know how they were going to face that evening. That night Sir Martin and myself were the speakers. I needn’t have worried, they were exuberant. It was as if they were at a wedding. They proceeded to talk non – stop through my speech, through Martin’s speech.

I asked them, why are you so cheerful?   They said to me you don’t realise, until this exhibition was opened, we didn’t know who would care for our memories when we are no longer here. But now that the Exhibition is there, we feel safe, that burden has been lifted from us. And it was at that moment that I suddenly realised that Martin telling the story of the Holocaust and so many other stories, had lifted a burden from so many broken hearts and given people a sense of permanence, a sense of being remembered, and being heard. Martin was the person who gave a voice to the voiceless. And although Martin was, and will be rightly remembered as one of the world’s great historians of our time, of Churchill, of the Second World War and of so many other things, I just want to speak this evening of how Martin was a Jewish historian specifically in two ways.

Number one, he told the Jewish story as it needed to be told through the eye and the hand of the master. He told the story of the Jews of the former Soviet Union, the Jews, as Elie Wiesel called them, ‘of silence’, but as Martin called them, ‘of hope’.  And he gave them hope. He wrote brilliant histories of Israel, of Jerusalem and of course the Holocaust.

One of his loveliest books came about in this peculiar way. Martin had known a very distinguished Indian lady, Lady Nehru, who was the mother of a friend of his from Oxford. For years he kept in touch with her. Then on her 90th birthday she finally confided in Martin, that she wasn’t an Indian of noble birth, she was actually a Hungarian Jew.

One of the last books he wrote, was In Ishmael’s House, the story of Jews in Muslim lands.   And if I’m not mistaken Martin was engaged before his terrible illness in telling the Jewish story of the contribution to Britain which I hope will be told. And throughout this wondrous work he told the Jewish story.

But the second point I make is that Martin in a deeper sense understood that by being a historian, he was showing us one way in which to to serve God himself.   He understood something more powerfully than anyone I every met, that history is a profoundly Jewish vocation. It was the American Jewish historian Yosef Chaim Yerushalmi who pointed out that Jews were the first people to see God in history, not just in nature. The first people to see history as a continuing narrative, with a beginning, a middle and a distantly good end. Isaiah Berlin wrote that all Jews who are at all conscious of their identity as Jews, are steeped in history. And in one of the most extraordinary moments that I ever read about, the great Jewish historian, Simon Dubnow, 81 years old, in the Riga Ghetto in December 1941 was shot by the Nazis, and his dying words, according to the story told, were ‘Yidn, shraybt un farshraybt‘, ‘Jews, write and record’. Tell our story. And that is what Martin gave to us all.

He understood that to be a Jew, even in the days of the Temple, is to get up every year bringing first fruits and say, ‘Arami oved avi’ the first ever people to to make memory a religious duty.

There was one line in the last speech Moses ever gave in his life that Martin had engraved in his heart and he wrote it and mentions it in his books.   Moses tells the future generation. Z’chor yimot olam – remember the days of old. Bino shemot L’dor V’dor – meditate on the history of previous generations. And that was the religious task Martin did. He turned our history into our memory and thus served God in this most beautiful of ways.

Many years ago as Chief Rabbi we devised, an award system for Anglo Jewry of the people and programmes and institutions of which we were most proud.  And we held back one back specific award which I was given the privilege of giving personally to the person who, in my opinion, exemplified all that was best in Jewish life and did so while contributing to society as a whole. I had not the slightest hesitation in giving that award to Martin Gilbert. Never have I made a decision that was more agreed with because he was a source of pride to everyone of us.

Friends, Martin was a great scholar, a great mensch, a great Jew. A man who made friends wherever he went and kept all those friendships. A man of truth who recorded the facts and then let them speak for themselves. And we all feel a sense of loss. Martin loved every member of his extended family and was given so much by everyone of them. But I must say, just personally, how unbelievably moving I found the way Esther cared for him in those last difficult years with such sensitivity, and such grace and such fortitude. It was moving beyond words to see. And Esther and all of Martin’s extended family, may Hashem send you comfort in the knowledge of this remarkable man that you and we were privileged to know .

The rabbis said ain osim nefashot l’zadikim – divreihem ain heim zichronom– we don’t make monuments for those who have died. Their words are their memorial. Martin gave so may people their memorial in words. We will never forget him. Yehi Zichro Baruch and his memory will always be a blessing. Amen