Gordon Brown speaking at the tribute event at Western Marble Arch Synagogue
Gordon Brown has called the late Sir Martin Gilbert an “unforgettable friend” who helped him “again and again with his wisdom.”

At a memorial on Tuesday night in front of close to 600 guests including Holocaust survivors, members of the Churchill family and ambassadors, the former Prime Minister revealed that Sir Martin was to be made a Lord before his health declined in 2012.

Mr Brown also told the audience at Western Marble Arch Synagogue in central London that the next book written by Sir Martin – who was Winston Churchill’s official biographer – was to be about Labour’s most recent spell in Downing Street.

“Martin had agreed to make his next book a chronicle of our period in government,” he said, and prompting laughter from the crowd, added: “and what he would’ve made of us all, I guess we’ll never know.”

Mr Brown also revealed that the historian and scholar, who penned epic tomes on Jewish history, Israel and the World Wars before his death in February, had helped him to make the first speech given by a British Prime Minister to the Knesset – and then had inadvertently further helped diplomatic ties.

Mr Brown concluded his speech by paying heartfelt tribute to a man who he said “sailed the river of life brilliantly”.

“Our hearts will still ache at his loss but he leaves behind imperishable works that will never be lost, and he lives on in the impact he has on all of us, on the millions who he never met but who meet him in the pages that he wrote.”

He continued: “And every one of this great, large group of friends who come today to honour Martin from all over the world will not only never forget him, but as long as we live we will never cease to be inspired by the light and the learning he gave to us, to our country, and to the world.”

Rabbi Lord Sacks also commended Sir Martin in a moving speech, saying: “He was such a very special person. We loved him, we admired him – we miss him.”

The former Chief Rabbi recalled an event before the Holocaust Exhibition opened at the Imperial War Museum in June 2000, when survivors came to a dinner organised for them to see the display before it opened.

“I dreaded that moment,” he confessed. “But I needn’t have worried. They were exuberant. It was as if they were at a wedding. They proceeded to talk through my speech, through Martin’s speech.

He said it was at that moment that he realised how Sir Martin, “in telling the story of the Holocaust and many other stories, lifted the burden from so many broken hearts.

“He was the person who gave voice to the voiceless.”

Speaking in soft, emotive tones, Lord Sacks told guests that Sir Martin had “showed more powerfully than anyone I ever met that history is an especially Jewish vocation”.

“He understood that to be a Jew is to make memory a religious duty. Martin had this phrase written on his heart – Moses tells the future generations: ‘Remember the days of old.’ That was the religious duty he had.

In a short speech, Lady Gilbert described her late husband as “a man of passion and compassion, who influenced the world as much as he wrote its history.”

Rabbi Nicky Liss, the minister at Highgate United Synagogue, said that though he only knew Sir Martin for a few years, “the wisdom he taught me gave me a completely new perspective on how to view the world. He taught me the importance, power and relevance of the individual in history.

“A blessing to the whole world, to the Jewish race and to Great Britain, Martin was also a jewel in the crown of our community.”

Gordon Brown has revealed plans were in place to elevate historian Sir Martin Gilbert to the House of Lords before his untimely death, as he led tributes to the revered historian at a memorial service in London.

Large numbers of the Churchill family, diplomats, Jewish community leaders and former colleagues of Sir Martin’s on the Chilcot Inquiry into the causes of the Iraq War were among 600 guests at Western Marble Arch Synagogue on Tuesday night.

The service paid tribute to the many facets of Sir Martin’s life: as the master biographer of Sir Winston Churchill, as a supremely gifted academic scholar, as a lucid chronicler of Holocaust stories, as the author of a record 88 books, and above all as a family man.

The former prime minister and his wife Sarah were close friends of Sir Martin, described by his widow, Esther, as “a man of passion and compassion”. He spoke in heartfelt terms about the aurthor, who had, he said, “helped me again and again,” and was “the most prolific scholar of our time”. He had helped Mr Brown to write the speech he made to the Knesset in 2008, and it was no coincidence, said the politician, that both he and the then Israeli premier Ehud Olmert had chosen a Martin Gilbert book to present to each other.

His next book, said Brown, was due to have been “a chronicle of our period in government”, and pondered on what such a book might have contained.

Like others paying tribute – former Chief Rabbi Lord Sacks, said, “He gave a voice to the voiceless.” Historian Sir Richard Evans, who had been Sir Martin’s last undergraduate student at Oxford, and Winston Churchill’s great-grandson, Randolph Churchill – Mr Brown spoke of Sir Martin’s meticulous attention to detail, his love of maps and his insistence on going to archive sources.

Holocaust survivors in the congregation recalled his signature work on re-telling their stories, while it fell to Randolph Churchill to brandish one of Sir Martin’s characteristic postcards, sent to friends and family far and wide on a regular basis.

The singer Richard Winch provided a reminder of Sir Martin’s pride in his identity with three songs which he had previously performed at Sir Martin’s 70th birthday celebrations – London Pride, There’ll Always be an England, and Gilbert and Sullivan’s For He’s An Englishman.

Rabbi Nicky Liss, minister of Highgate Synagogue, was a close family friend and had helped organise his burial in Israel. He chaired the proceedings and said that plans were in place to make a permanent memorial at the synagogue which is being rebuilt. Western Marble Arch’s Rabbi Lionel Rosenfeld sang “El Maale Rachamim” to close the service. 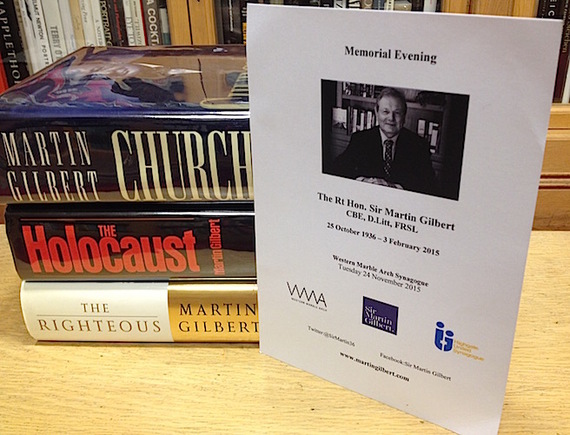 I’ve been thinking about the memorial service that I attended recently for my late friend and mentor, Sir Martin Gilbert; Winston Churchill’s official biographer and so much more.
I am, I confess, not a great one for memorial services. To begin with, they’re sad, no matter how we try to spin them. Attending one for a total stranger seems to me morbidly importunate. As for acquaintances, I always come away wishing that we simply could have said whatever we all had to say to them while they were alive.
Still, I was drawn to Martin’s service, held Tuesday evening, the 24th of November, in London. It was worth a hasty journey across the ocean on the cusp of Thanksgiving to just sit for an hour or so in the proximity of his memory. Six hundred packed Western Marble Arch Synagogue on Great Cumberland Place; friends, family and unaffiliated admirers of Martin, the man, and Martin, the historian.
The range of attendees proved as wide as the boundless focus of Sir Martin Gilbert’s writing, including Holocaust survivors, former “Refuseniks,” ambassadors, one former British Prime Minister and, of course, many members of the Churchill family. The capacious, golden-hued synagogue sanctuary conveyed an enveloping current of shared tenderness. I really felt that every person present harbored their own individual sense of having known Martin Gilbert, even if only through his writing.
We were welcomed by Sir Martin’s widow, Lady Esther Gilbert. Though I have known Esther for some time, I truly got to know her during the excruciating years of Martin’s final illness. Her tenacious devotion to him in this protracted period of such debilitating need reaffirmed for me what I confess has become a waning faith these days in the existence of love as a selfless power.
The former Labour Prime Minister Gordon Brown followed Esther to the pulpit. I had long known of Brown’s friendship with Martin. (I wrote here about one particular back-channel interchange between them some years back, just after Brown became Prime Minister and Barack Obama President). In office from 2007-2010, the Rt. Hon. Mr. Brown did not exactly wow as P.M. but his words about Martin this night were passionately felt and stirringly personal. “Martin,” Brown said, “sailed the river of life brilliantly… Our hearts will still ache at his loss but he leaves behind imperishable works that will never be lost, and he lives on in the impact he has on all of us, on the millions whom he never met but who meet him in the pages that he wrote.”
Brown revealed that plans were in place at the time of Martin’s death to elevate Sir Martin to the House of Lords. He also disclosed the fact that Martin’s intended next book, before the onset of his illness, was to be a chronicle of Brown and the Labour Party’s period in government. “What he would’ve made of us all,” grinned the former P.M., to gales of laughter, “I guess we’ll never know.”
Brown also shared a marvelous story about his own first appearance as British Prime Minister before the Israeli Knesset in 2008. Martin wrote his speech. Brown chose a Martin Gilbert book as the gift he would present to then-Israeli premier Ehud Olmert. “It’s a reflection of Martin’s pre-eminence,” Brown went on to observe, “and our shared admiration of him that without either of us knowing it, I had chosen to give Olmert a copy of Martin’s The Righteous, and Olmert had chosen to give me a copy of Martin’s The Story of Israel.”
Many other distinguished speakers spoke in the Prime Minister’s wake: Sir Richard Evans, the eminent historian and Martin’s former pupil; Rabbi Jonathan Sacks, the former Chief Rabbi of the Commonwealth; Rabbi Nicky Liss, of Martin’s Highgate United Synagogue; and Randolph Churchill, Winston Churchill’s Great-Grandson. Each said fine things inimitably.
I nevertheless came away still thinking about Gordon Brown. Here was a man who had been Prime Minister of Great Britain but who had never impressed himself upon the world in any Churchillian way. I knew I would now never forget him simply because of how he had expressed his love for his friend. In death, Martin had humanized Gordon Brown and, in so doing, had elevated him — as he did so many, many historical figures, large and small, purely by pursuing their truth and setting it down forever.

Barry Singer writes about the Arts, Literature & Winston Churchill. He is the proprietor of Chartwell Booksellers in NYC.