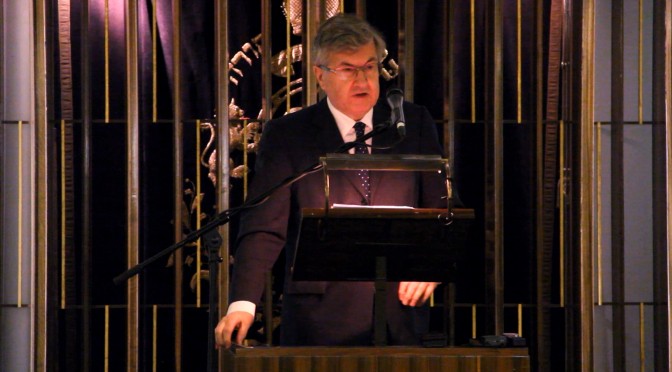 I was Martin’s last undergraduate pupil. In 1968, just before he was appointed the official biographer of Sir Winston Churchill, he tutored me in 20th-century European History. He was unlike any other tutor I had encountered. While conventional Oxford history tutors sent their students to textbooks for basic information and monographs and articles in learned journals to bone up on the latest controversies and debates, Martin didn’t bother with any of this, and sent me straight to the original sources instead. Rather than reading historical analyses of the Treaty of Versailles for instance, he made me read the original Treaty itself, along with the diaries of men like Harold Nicolson who took part in the negotiations, Maynard Keynes’s Economic Consequences of the Peace, the Hansard record of the House of Commons debate on the Treaty, which I was shocked to discover was almost entirely taken up with furious arguments over Irish independence, and a number of obscure pamphlets by authors I’d never heard of. He then left me to make my own mind up about the question he’d set.

But when I presented my arguments to him in the tutorial I had another shock in store. He wasn’t interested in them at all. I even complained about this to him at the end of our fourth or fifth meeting: ‘What do you think about my arguments?’ I asked him somewhat petulantly. ‘Oh never mind about those’, he said dismissively. ‘You’ll change your mind by the time you get to Finals anyway.’ Instead of discussing my no doubt rather ill-informed ideas, we discussed the documents he had set me to read. He clearly found the original sources far more interesting than anything historians, including myself, had to say about them.

Being confronted with original material was indeed exciting and challenging. Martin gave me a taste for historical research that has never left me. Much more important, however, he taught me to write. Each week he would go through the essay I had handed him in advance and take it apart. He straightened out my English, shortened and simplified my sentences, and did his best to curb, not entirely successfully, my tendency to write overlong paragraphs. He taught me to balance the structure of my sentences and to create a sense of rhythm and direction in my paragraphs. He was the only tutor I had who paid any attention to how I wrote rather than what I wrote, and I’ll always be grateful to him for that; indeed, I have ever since then annoyed generations of my own students, particularly those who are writing PhD theses, by criticizing their written English much as Martin used to criticize mine. I hope he would have approved.

‘Read some A. J. P. Taylor’, Martin said, ‘to learn how to write’. His advice, based on the model of Taylor’s own style, wasn’t always sound: ‘End every paragraph with a paradox’, he said for example: ‘A paradox a paragraph’. I tried it once or twice but it seemed rather artificial and didn’t work for me. Martin was of course famous in the Sixties as a pupil of Taylor, and his early work was very much in the Taylor mould: an iconoclastic study of The Appeasers, written with Richard Gott, that followed Taylor’s attempt to rescue them from the enormous condescension of posterity, a volume of documents on Britain and Germany between the Wars, a short study on The Roots of Appeasement and a biography of the pacifist Clifford Allen. Taylor’s penchant for geopolitical determinism, most obvious in his book The Course of German History, was no doubt one of the influences behind Martin’s wonderful series of historical atlases, with maps of absolute clarity and accuracy drawn by the cartographer Arthur Banks. ‘Geography’s about maps’, so it used to be said, ‘and History’s about chaps’, a somewhat politically incorrect definition one would have to rephrase today, but Martin in any case proved that it wasn’t true, and that maps were an essential tool for understanding the past. I used to buy the atlases as they came out in cheap paperback editions, and I’ve always used plenty of maps in my own books, where they can sometimes convey at a glance what it takes several paragraphs of prose to put across.

Martin’s admiration for Churchill echoed that of A. J. P. Taylor – ‘the saviour of his country’, as Taylor called him in his English History 1914-1945. Already by the time I met him, Martin had been working for some time as Randolph Churchill’s research assistant, and after he had been appointed official biographer, by which time I was studying for a PhD, I was asked to tutor an undergraduate, Susie Sacher, in modern European history; if I could help her get a good Upper Second Class degree, he told me, then he would engage her as his own research assistant. She duly did, and over the following decades worked closely with him on the Churchill project; indeed in many ways the biography and companion volumes are their joint production. These volumes attest to Martin’s huge appetite for facts and his determination to get them right, his zest for documentary research, and his drive to ensure that no archive was left unvisited, no contemporary uninterviewed, and no aspect of his subject’s life left unexamined. The volumes will last for a very long time indeed; they represent one of the great biographical enterprises of our time.

Uninterested he may have been in controversies and debates between historians, but that did not mean Martin was uninterested in argument, as anyone who reads his defence of Churchill’s conduct of the Gallipoli campaign, his role in dealing with the Tonypandy miners’ strike, or countless other much criticized episodes in Churchill’s life will attest. His book Auschwitz and the Allies, published in 1981, attracted widespread controversy by exposing for the first time the casual anti-Semitism of Foreign Office mandarins.

By the time it came out, Martin had already begun to turn his attention to modern Jewish history, and in 1986 produced his masterpiece, The Holocaust: The Jewish Tragedy. Here his preference for factual and documentary compilation found its ideal expression, as he put together extracts from often obscure source material in a vast collection of unforgettable and unsurpassable power. No one can read it and remain unmoved, and the book exerted a huge influence on bringing the Nazis genocidal policies and their impact to broad public attention before the Holocaust occupied the place in western cultural memory that it does today. After the experience of reading it, who could doubt that the Jews deserved a homeland after the end of the war?

The book marked another phase in the career as an historian that evolved alongside his career as the biographer of Churchill, with publications on the history of the Jews, of Jerusalem, and of the State of Israel. Martin won an even wider readership, perhaps, with his chronicles of The First World War, and The Twentieth Century. Detailed, lucidly written as always, and reliable in their account of the facts, they appealed to all who wanted to know more about the events of the period they covered.

Few historians have had so fruitful an engagement with so many different areas of modern history as Martin did. For him, History was not an abstruse, abstract or intellectual subject, it was a passionate engagement with a living past that had a direct relevance in the world of today. I was touched when he came with Susie to sit in the public gallery of the High Court in London during the case brought by David Irving against Deborah Lipstadt and Penguin Books over her allegations against Irving of Holocaust denial and historical falsification, and took me out for lunch every day during the 28 hours of my cross-examination as an expert witness, when I was not allowed to talk to the defence team. I could have thought of more relaxing ways of recovering from a quadruple heart bypass operation, but I will always be grateful for the kindness he and Susie showed me then. Martin was always loyal to his friends; he made a special effort to come to my inaugural lecture in Cambridge, he invited me to his memorable 70th birthday party, when I had the pleasure of meeting Esther, and of course I was on the lengthy list of recipients of the postcards he sent to his friends from all over the world, as I am sure many of you were too.

In remembering Martin this evening, we are remembering not only the biographer of Churchill, we are also remembering a remarkable historian, a great teacher and a kind, warm and loyal friend. Thank you very much.